The Chilean Minister of Energy, Ms. Susana Jiménez, attended the installation ceremony alongside with other authorities and representatives from Solarpack and KfW IPEX-Bank

Solarpack celebrated on May 22, together with KfW IPEX-Bank, the installation ceremony of the first set of modules of the Granja solar project in Chile. In addition to the CEO of Solarpack, Mr. Pablo Burgos, and representatives of KfW, the Minister of Energy, Ms. Susana Jiménez Schuster and the Deputy Secretary of Energy, Mr. Ignacio Guerrero Toro attended the event. Also present were Mr. Enrique Ojeda, Ambassador of Spain, the Intendant of the Region of Tarapacá Mr. Miguel Angel Quezada and the Energy SEREMI Ms. Ximena Cancino, together with other authorities, businessmen, collaborators and personalities.

Located in Pozo Almonte, Tarapacá Region, in the Atacama Desert, this project will have an installed capacity of 123 MW once in operation, which is scheduled to happen at the end of the year. The project, which will involve a total investment of c. US$ 114 million, has long-term non-recourse agreement granted by KfW IPEX-Bank for up to US$ 91 million and will sell its energy through 25 long-term energy contracts (PPA) signed with the main Chilean electricity distribution companies. 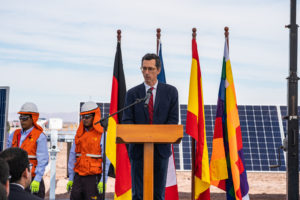 Mr. Pablo Burgos (Solarpack) highlighted that "for Solarpack this project confirms, 11 years after the start of our activity in the country, our long-term commitment to Chile, market which we consider key for the development of our company and the solar photovoltaic industry in general. The Granja project will be one of the most efficient and competitive solar PV plants in the world and will generate more than 340 GWh of clean electricity every year, contributing to the decarbonization of the country's energy matrix".

You can find out more about which cookies we are using or switch them off in settings.

This website uses cookies so that we can provide you with the best user experience possible. Cookie information is stored in your browser and performs functions such as recognising you when you return to our website and helping our team to understand which sections of the website you find most interesting and useful.

Strictly Necessary Cookie should be enabled at all times so that we can save your preferences for cookie settings.

If you disable this cookie, we will not be able to save your preferences. This means that every time you visit this website you will need to enable or disable cookies again.